I love being able to take part in our pre-school days – no matter if it’s helping a student with his work, subbing for a teacher, or riding on the truck with the kids to and from Lima. Yesterday our whole family made the trek out to the batey. We didn’t help much in the classroom since we had our boys with us, but I did have the opportunity to just “be”.

I exchanged a few words with wide-eyed Scarlette as she greeted me from across the room. I got my bear hug from smiling Reina Belle as she waited patiently for the trash bag to come around during clean-up time. I snapped a picture of Alejandro meticulously drawing his trees and gluing his sun onto the craft page. I listened to the kids’ bubbly laughter as they watched Pam brush her Sammy’s teeth to show proper dental hygiene techniques.

But there was one moment that especially touched me yesterday morning. It was an exchange between two 4-year-olds that I don’t know well – Yeifrey and Yilena.

Since it had rained on Thursday, there were quite a few mud puddles and “dirt mines” around Lima come Friday. Each time the kids transitioned to another activity, the classroom had to be swept due to the mud deposits on the floor. During circle time, the children moved to their usual spot on the letter mat to listen to some stories featuring some angry ants and some adorable little puppy dogs. The kids stared in amazement at the colorful pictures and listened in wonder to the strange-sounding English words streaming from Pam’s mouth. I was sitting near the back of the room, helping students who got “off-task”; I’d quietly try to move their attention back to the story. 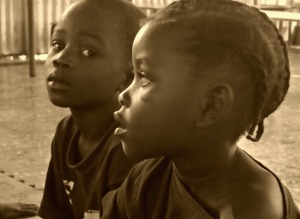 That’s when I saw Yeifrey and Yilena. They were hunched over, apparently talking or messing with something on the floor. I was getting ready to “shush” them and point them up to the ant army that was marching across apples and around aardvarks.  But instead, I paused and watched as a beautiful picture of friendship and love played out in front of me. Yilena had some mud caked on her ankle from the messiness of the day. And Yeifrey was leaned over, wiping it off with his bony little hand. After his attempt to clean off the mud, he saw that her leg was still dirty. He licked his skinny, muddy fingers so he could rub off the rest of the dirt. And then it was over. They both moved their attention back to the story and continued with the daily routine.

It was a simple thing. A moment that came and went quickly. Yilena didn’t hug Yeifrey or verbally thank him for his help. And Yeifrey didn’t seem to expect that from her. He saw a need and quietly took care of it.

As I was going through my photos later, I found one of Yeifrey and Yilena. Again, my heart was touched. I noticed something on Yilena’s shirt – a sticker! At first I was confused. She hadn’t answered a question in class in order to receive a prize. I looked more closely and realized that Yeifrey had again shown love to Yilena in a sacrificial and heartfelt way. The sticker that he had been given for answering a question correctly was ripped in half, one part on his shirt and the other half placed on hers.

Our pre-schoolers are slowly discovering what it looks like to learn, obey, and love others. What a joy to see love in action in the heart of a child.  A little mud and a ripped sticker were the mediums this time.  So excited to see the continued growth in these precious little boys and girls.

One thought on “Mud and a Sticker”